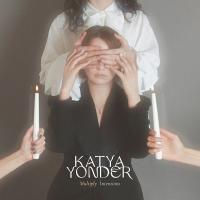 ''Living on the border of Europe and Asia all of my life, I have always been interested in both of these huge parts of the world and their centuries-old history"

Multiply Intentions is the fourth full length release from Russian multi-instrumentalist Katya Yonder and her first long player since 2017. Borne from a new found sense of confidence and self-awareness, the album is inspired by both local and neighbouring musical cultures and a wide range of social influences.

Whilst her previous records were purely instrumental, for fear that she would be misunderstood or even ridiculed, Multiply Intentions sees Katya introduce her vocals for the first time. Singing in four different languages (her native Russian, English, Japanese and French) across 13 tracks, the album is an ode to her diverse musical upbringing and the wide range of influences on her as an artist.

Multiply Intentions was built from initial sketches she developed for her 2018 Métron Mixtape (a mix that was highlighted in Pitchfork’s monthly mix roundups). Working with these building blocks, and blending in her love of the music of Madonna, Brian Eno and Cocteau Twins with references drawn from 80s pop, old video game soundtracks and soviet films, Katya moved these initial ideas into larger, richer songs that are layered by her ethereal vocals.

"Out of respect and sincere love for the history of music on both sides of the world, it is very difficult for me to drop all this and not sing the so-called ode to everything that delights me"

Born in Yekaterinburg, a large city in central Russia that sits above the northern border of Kazakhstan, Katya’s interest in music began with learning the violin as a child, an instrument she still plays today. Throughout her childhood, Katya was exposed to different music and cultures via her parent’s eclectic record collection, listening to medieval, classical, electronic and retro-pop from the 70s and 80s.

Growing up, she began to look East, finding joy in Japanese music, anime and the nation’s unique cultural mentality and environment. To this she married her affections for Russian music and its southern neighbours like Azerbaijan where a professional collaboration with Farhad Farzali led her to explore and build a love for Azerbaijan music and culture.

Since the release of last album in 2017, Katya took a break to focus on commercial music writing, which has since become her full time job. This experience, combined with the confidence she found in her personal life changed the way Katya felt about her approach to music and inspired the development of Multiply Intentions.