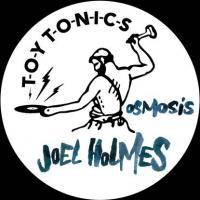 Joel Holmes is a phenomenon that fits perfectly into the musical scenario of the next years. 38-year-old American jazz pianist and 4 times Grammy nominated. He was the musical director of Carl Craig’s Synthesizer ensemble as well as the keyboarder in legendary Grammy wining band of Roy Hargrove (the IT jazz artist from the late 1990ies, who later died.)

Holmes is always hunting for the new, so he moved to Berlin a few years ago. Being interested in what’s happening in that new dance world. Similar to Jazzers from the 1970ies like Herbie Hancock and Quincy Jones who turned into disco stars Joel, the jazzer wanted to connect with the new Berlin electronic scene. He succeeded, teamed up with upcoming London house kid Cody Currie and the Toy Tonics crew who is working on new sounds in Berlin that connect the organic and jazz musicians scene with the dance and house world. Developing a new style of Jazz-House… (that has nothing to do with sampled jazzy‘ house! If you know what we mean).

Joel and Cody Currie released 2 EPs that had a good buzz mainly in the UK and USA. Big support from the Worldwide FM and BBC Radio world as well from tastemaker DJs such as Bradley Zero, Gilles Peterson and Masters at Work.

While working on these EPs Joel created a kind of new jazz-dance universe around him in Berlin. He curates a bi-monthly jam session in an underground location where the crème de la crème of the international ex-pad -musician scene meet up. Joel became THE MAN to hang out when American musicians come to Berlin. Like when Erykah Badu was doing her Berlin gig in Berlin in 2019, after the show all the band moved to Joel's place to have a legendary jam session. Yes, there is a lot of happening in the new Berlin Jazz meets Electronic scene. And Joel Holmes is in the center now.

So it’s time for a Joel Holmes Solo EP. The EP was recorded in a couple of jam sessions. Later reworked and co-produced by Kapote and Sam Ruffillo and mixed by Justin Vanderfolgen from DFA in New York.

It’s a big step for Joel Holmes. He started to sing in a very smooth, deep way. He wanted to make dance tracks that have a song structure and should not be too static, but still be playable in good DJ sets. And that's what you get: A Lot of Soul. Deep House vibes in a New York style and Joel's skills as a keyboarder.

Joel Holmes is a phenomenon, for sure. And this EP could be a manifesto for what he is doing in Berlin now.