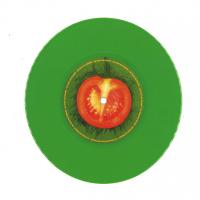 Once upon a time Mr. Tomato made his way to Brazil. Surprisingly it was the time of the carnival in Rio de Janeiro, and he was drawn right into the heart of it.
He was so overwhelmed by the joyful celebration that he ended up partying without sleeping for 3 days.

Just before this “love” experience came to an end he was attracted by a bunch of people singing in the street:
"Tudo que eles querem, é ver o povo daqui sofrer
Retidos na miséria e a elite no poder"
Which literally means: “All they want is to see the people suffering, held in misery and the elite in power”.
Few minutes later a drum came up with a beat, followed by a full orchestra.

It turned out that this was the Zè Bigode Orquestra and that they were playing their new single Tikulafe.
The people listening went crazy, and Mr. Tomato was impressed when he realized which power music could have to communicate strong and ethical messages.

He decided to come home with this Afrobeat gem.
We couldn't believe our ears when we first listened to it, and we knew that this piece deserved 2 remixes:
the one you find on the vinyl, is from one of our favourite producer out there, the Swiss multi-instrumentalist Melodiesinfonie. And the other one from Italian electronic producer FiloQ (digital only), who is also one of the mind behind the brilliant project Uhuru Republic, which was featured on the Veggie Tales Vol. 3!!!

Honoring Mr. Tomato we serve all this with a delicious recipe of homemade ketchup (you might have thought this was an impossible dream, but it's actually easier than you imagine)!

The result is a tasty 7” inches called “Veggie Tales Vol. 4”!!
We hope you’ll enjoy as much as we did.
Buon appetito!