GUY MAXWELL Outside My Window 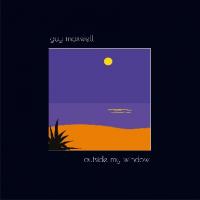 Basking in the golden glow of an Indian Summer, Basso brings us a much needed reissue of one of his most treasured musical discoveries, Guy Maxwell’s ‘Outside My Window’. A long time favourite in the Growing Bin, this mellow masterpiece originally crept out in 1980 with no backing from its label, the soon to burst Bubble. Now resequenced and redressed to the exacting standards of Mssr. Maxwell, ‘Outside My Window’ is ready to warm the hearts and cheer the ears of a whole new audience.

Born in Bordeaux under a wandering star, Guy spent the 70s on the road, freewheelin’ from Paris to Rome, guitar in tow, before settling in Switzerland at the end of the decade. There he reconnected with school friend Serge Maillard, whose Santiago bandmates swung by to help bring Guy’s arrangements to life. Joined by Jan Dix (Om Buschmann and Foodband) on percussion and Ruth Failure (later in Mag and the Suspects) on guitar, and the Santiago powerhouse of Tato Gómez, Sergio Castillo and Paco Saval, who also leant his deft touch behind the desk, Guy put together a nine track trip through groovy AOR, gentle jazz fusion, cosmic folk and yacht rock.

For this reissue, Guy’s stripped back the tracklist, tossing aside a trio which didn’t quite stand the test of time in favour of a concise six song LP which brings brilliance in every bar. ‘Watch Out Sally’ introduces the LP with playful keys and a Latin lilt, a sophisticated seventies pop song that’s more Aja than A-Ha, sax and strings sending the whole track soaring as Guy muses on wanderlust in his honeyed tones. ‘You Never Sang This Song’ is undoubtedly a lost classic, embodying all the bittersweet beauty of yearning while riding a rollercoaster arrangement of folk-jazz fusion enhanced by Serge Maillard’s quicksilver solo. ‘Funny Weather’ looks both ways as it closes out the A-side, marrying the smooth sounds of the 70s with the rain-soaked jangle of the decade to come. The B-side opens with the LPs second lost classic, the frankly sublime ‘Beautiful Day’. Stripped back to acoustic guitar and subtle hand percussion, this jazzy ballad brings a tear to your ear before drawing your attention skywards with the acid folk energy of the chorus. There’s mellow magic in the air on ‘Summer Song’, an optimistic ode to sunshine and romance lifted way beyond the AOR standard by a lyrical sax solo before Maxwell closes the set with the 7/4 escapism of ‘There’s A Train Leaving’, a fond farewell which sees the ensemble say goodbye in perfect harmony.