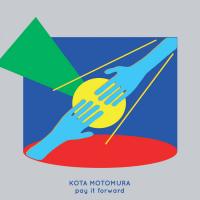 Three years after he released the incredible New Experience EP (picking up plaudits from Bill Brewster, Tim Sweeney, Laurent Garnier, Horse Meat Disco, Leo Mas & 6Music’s Tom Ravenscroft, among many more), Tokyo’s Kota Motomura returns to Hobbes Music for his debut LP, Pay It Forward. This is the first vinyl release on Hobbes Music since the much-loved ‘Aranath’ EP by Leonidas & Hobbes last Spring. While the label maintains the level of quality control for which it has become recognised, the artist continues to subvert electronic and dance music norms in his iconoclastic way on this extraordinary record.

He’s a mysterious character with an ear for idiosyncratic music that runs the gamut from ambient, exotica and jazz to disco, house and techno via post punk, new wave and funk. It’s highly original and all adds up to a confection perhaps best described as ‘Balearic’.

B-side opener Emotion features Takeuchi again (on flute this time) and more vocal chants before things take a dramatic turn, threatening to open up into a full fanfare before calming and then bursting into wild life again with the exhortation that “C’mon, everybody dancing!” Rhythm flirts with an energy and pace more akin to a techno record: drums, drums, more drums plus a fair few yelps and chants - the kind of DJ tool that will send a simmering dance floor wild in the right hands. Flower closes things in a more melancholy style, familiar to fans of ‘Aboy’ from the New Experience EP, with plaintive acoustic guitar (performed by Akichi), birdsong and big piano chords.

‘Gonna review in MÜ mag... very fine stuff!’ JOE MUGGS
‘Will be reviewed on the blog’ MONOLITH COCKTAIL  BILL BREWSTER played Flower on the DJ History podcast #641 (25.3.22) 'I really like this album, Flower and Paradise are my favourite' LEO MAS ‘I like Paradise’ AL KENT ‘Woo this is tasty. DEFO playing on my next radio show. The label’s A&R is defo getting better and better. HM has been putting out some dope stuff and this one seems really good quality’ RED RACK’EM
‘Paradise and Flower sounding good’ NICK THE RECORD
‘Tunes sound great!’ PHIL MISON ‘Going to include Paradise and Flower on my Sunday Ibiza global radio show PHAT PHIL COOPER (Nu Northern Soul)
‘Very nice album with influences from many different genres. I especially like To Be Free with nice synths and guitar cutting, and Flower, which is a chill vibe’ KZA (Mule Musiq, Endless Flight)
'100% correct about the ALFOS potential of To Be Free!' SEAN JOHNSTON (A Love From Outer Space)
'Stunning, will fit perfectly with the vibe of my radio show’ S/A/M (Music For Dreams, DK; Playa Del Sol, Ibiza)
'Stellar work, i'll make a bet that Flowers is a Balaeric classic this summer' DRIBBLER (Breakfast Club, Ibiza)
‘It's cool in a nice smelling psycho sense, it was a very DEEP sound that I couldn't produce. Congrats!’ ALTZ (Altzmusica)
‘Paradise is my jam, it's deep, sunny and never boring. I'm interested to see how this will work on the dance floor. Overall a great album with solid composition and impressive use of live instruments!’ SOBRIETY (fka Chloé Juliette)
'Very tidy selection' ASTROJAZZ (Kelburn Garden Party, Wee Dub, Samedia Shebeen, Disco Makossa) ‘This is a lovely release. Follows on from New Experience in the best way possible. It's got lots of vibes going on but holds together as a cohesive piece of work. Love it’ JAMIE THOMSON (La Cheetah, Glasgow)
‘To Be Free is a track i could imagine Andy Weatherall playing in one of his sets at A Love From Outer Space’ KIRSTIE PATON aka She-Bang Rave Unit (Threads Radio, Radio Magnetic)