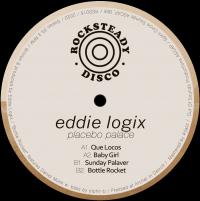 Rocksteady Disco's newest recruit is Eddie Logix. He's been at the heart of the Detroit underground for over 15 years, most recently with his Technically Yeah live hardware nights, a grip of ambient and hip-hop releases, engineering for Assemble Sound. He’s one half of left-field funk-hop duo Mega Powers with Pig Pen, and of BLKSHRK alongside Blair French, who first appeared on Rocksteady Disco back in 2016 on ...For Todd.

Placebo Palace is Eddie's first solo dance EP, combining all of this experience into a diverse offering for discerning dance floors. The EP leads with “Que Locos”, a tropical house banger driven by brass and Latin-Jazz piano. “Baby Girl” rounds out the A side, with a dusty R&B vocal sample coupled with a massive and unexpected bassline. The B side is darker and deeper, starting with the frantic Afro-Jazz-Deep House “Sunday Palaver”. Closing the EP is “Bottle Rocket”, a psychedelic surf rock-tinged disco-not-disco chugger, with live guitar by Daniel Monk and electric bass by stphn-b. More forward thinking music from Detroit via Rocksteady Disco!
レーベル #: ROCKSTEADY DISCO (US)