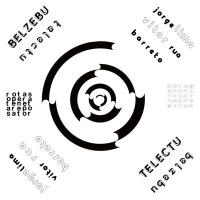 “Belzebu” was originally released in 1983 and it had absolutely no context in the Portuguese music scene. TELECTU duly complain about that in the xerox presentation included with the album, but their idea was never to make things easy anyway.

Jorge Lima Barreto (JLB) was very active in the avant-garde and jazz scenes (he recorded a ground-breaking AnarBand LP in 1977 together with Rui Reininho, later to assume lead vocals in the pop band GNR) and his uncompromising attitude and leftist leaning didn’t earn him many friends in the press or industry.

Vítor Rua (VR), founder and main composer in GNR, met JLB at an art gallery roughly a year and a half before the recording of GNR’s first LP “Independança” (1982). The result of this meeting was an acquired friendship and long-lasting collaboration, opening up a vast field of experimentation VR eventually felt GNR couldn’t accommodate. Let’s not forget, however, that the whole of side B on “Independança” was taken up by one long improvised instrumental track built around bass and drums. On a pop LP. After the fact, JLB conceptualized this pop experimentation in his typically confrontational style. It resulted in the liner notes printed on the LP’s inner sleeve.

By the time GNR played on the memorable second edition of the Vilar de Mouros festival (August 1982), the inner turmoil regarding musical orientation resulted in the band being down to three elements. VR was obviously one of them but he was already thinking aside and beyond GNR. Drummer Toli was invited to play with VR and JLB in the TELECTU gig on the same festival, the only time this formation played live. The trio went on to record TELECTU’s first LP “Ctu Telectu” still in 1982, dragging in Dr. Puto to add some vocals on three tracks. Reininho was considered but never invited. This was clearly not GNR.

But who or what was GNR? We’ll mostly skip this still controversial subject. VR made a bold move as early as February 1983, when, as founder of GNR, he fired the whole band. But due to previous agreements, the band played live for a few months more with VR, Toli, Reininho and temporary member Nuno Rebelo, invited by VR. When the other members decided to carry on playing under the name GNR (including Reininho and Toli), things got ugly.

Meanwhile, during the later half of 1982 and early 1983, TELECTU embarked on a series of home sessions that resulted in “Belzebu”’s two sides. The music was carefully noted, all the unorthodox methods written down, all the techniques described and influences assumed (notably the New York avant garde scene JLB had contacted in his travels throughout North and South America).

TELECTU were approached by Cliché to release “Belzebu”. Cliché was primarily a clued up clothing shop located in Bairro Alto (Lisbon), a neighbourhood by then becoming trendy with the art crowd after the Frágil club opened in 1982. They also sold selected imports and released a handful of records. Their catalogue was small but consistent, four LPs and one EP: The Raincoats, Young Marble Giants, Pigbag, David Thomas and Material.

The album landed in uncharted territory, the first minimalist recordings released in Portugal, according to the duo. Rich, ambient textures are sequenced along with strict repetitive structures on guitar (VR’s instrument of choice), drum machine, synth and other electronic and acoustic gear.

But the very first idea for this album was even more radical: a granular, high-pitched sound that was to occupy the whole duration of the LP. The duo subsequently named it “Belzebu Zero”. The idea was abandoned during the above mentioned home sessions, when different compositions started to take form, but that sound was kept as background when TELECTU finally recorded the album. It precedes the music on both sides and continues throughout.

“Belzebu” is adorned by a wonderfully “technical” sleeve designed by visual poet E.M. De Melo E Castro, reflecting the profoundly alien quality of the music. This reissue includes the “Belzebu Zero” recording remastered from the original cassette tape, revealing in plain sight what could only be imagined thus far.