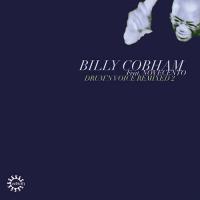 Since the release of the first volume in 2019, we knew we couldn't stop there. And in 2021 we are even more excited to present the album "Drum'n Voice Remixed 2" by the legend Billy Cobham in collaboration with Italian producers and composers Nicolosi / Novecento.

Acclaimed as jazz-rock fusion's greatest drummer, Billy Cobham has dedicated his whole life to musical exploration and creative expression. Born in Panama, he has been surrounded by music. His father was a pianist, his mother was a singer and Billy started playing drums at four years old. Throughout his career he has collaborated with artists like Miles Davis, Horace Silver, Airto Moreira, George Benson and appeared on over 300 recordings, including icons like Peter Gabriel, Quincy Jones, Jack Bruce, Bob Weir, and James Brown, and to date, has produced and released more than forty albums as a leader. The first album ‘Spectrum’ is a masterpiece and still considered a reference album today.

Billy and Nicolosi composed so many songs of the highest quality and class that we immediately wanted to get to work preparing a second volume of remixes. After the release of the Little Louie Vega mixes of ‘Interactive’ we are really happy to present a sampler of the ‘Drum’N Voice Remixed 2’ including remixes from The Reflex, Dele Sosimi & Medlar, Local Artist, Pellegrino and Arp Frique.

The French producer based in London The Reflex has made a name for himself thanks to his vinyl series remixing classics of funk and disco music using the original multitracks. He gives ‘Roller’ featuring the legendary George Duke, another lease of life making us dance with his typical groove and warm sounds. Afrobeat Ambassador Dele Sosimi teams up again with Peckham producer Medlar, adding the song an infectious groove and classic 80s analogue synths dubbed out live on the original drum by Billy Cobham. The result is sensational.

Toronto's producer Local Artist, one of the co-founders of Mood Hut, gives us an effective version of ‘Let Me Breathe’ using spaced out effects, robust subbass, warm chords. A party vibe with an atmospheric touch. Niels Nieuborg aka Arp Frique, a key member of the Dutch live music scene, gives us his reinterpretation of ‘Africa’s Sounds’. A slow experimental journey full of electronic sequencers and afro disco influences. Neapolitan producer and dj and Early Sounds Recordings label head Pellegrino, reworks Cobham’s classic ‘Le Lis’ with his distinctive jazz-funk with his Mediterranean melodic flavour, where the synthesizers and acoustic instruments bring a magic vibe.