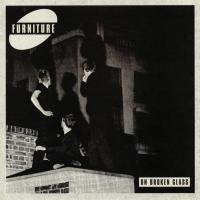 Emotional Rescue returns to the music of British “pop” band Furniture, with an EP of the band’s own extended versions, remixes and unreleased takes of their particular output.

Taken from three 12”s that followed When The Boom Was On (ERC072), the songs included cast a light on their development from 3 to 5 piece, adding Sally Still (bass) and Maya Gilder (keyboards) and the new male/female frontline. The subsequent broadening of their line-up and sound meant they could start to address the kind of pop music they wanted to play.

After the early releases garneered radio play and reviews, Furniture were launched into the melee of ‘80s pop. An anomaly, the band found they attracted a specific kind of “intense” follower, who were often beguiled by Furniture’s freaky normality. This was addressed on the 1984 release, ‘I Can’t Crack’. A more urgent version of the sound Furniture had debuted with ‘Why Are We In Love’, the track, sung by Tim, was based around a sequencer-like rhythm played live by drummer Hamilton Lee, and a clarinet part played by Tim’s brother, Larry Whelan. A mix of bleakness and euphoria, the song was and is a favourite of the band and considered one of their best self-productions, as well as becoming a latter day club play.

This is followed by the studio experiment ‘Throw Away The Script’, where the band wrestled with sequencers and synth-pop, but then countered it with a free-jazz sax solo. Found on the flip of the double A -side of ‘Love Your Shoes’ 12”, this instrumental version too became an underground club hit, including a cult play at Fran Lenaer’s influential Valencia club, Spook Factory. Played loud, the studio mastery, trickery and oft-accidental discoveries come to the fore, with tissue-damaging frequencies giving extra sound system shaking bottom end.

The B-side continues the band’s love of making extended mixes with ‘Dancing The Hard Bargain’. Co-produced with Tim Parry (formerly of Blue Zoo), they threw everything at these 12” versions. Able to relax and focus on the sounds they really liked, rather than the ones thought more commercial, this can be clearly heard on this compelling, percussive mix, a stop-start breakdown becoming a band hallmark.

To close this collection is the mammoth ‘Bullet’. Again sung by Whelan, an edited version of which debuted on the 1986 Survival compilation of Furniture tracks called ‘The Lovemongers’, here this previously unreleased original take is centred on a mesmeric tape loop, live drums and a guest appearance by violinist Helena Bjorelius.