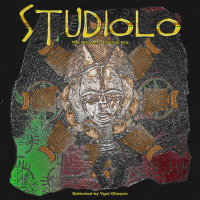 Antinote and Dizonord present STUDIOLO - Belfiore, Veneto, 1447. Birth of the first "Studiolo" or cabinet of curiosities, these rooms where "rare, new, and singular things", often exotic, were stored and exhibited. A practice that would spread throughout Europe during the Renaissance.

Northeastern Italy, at the beginning of the 1980s, an entire local scene gathered around a handful of DJs who put their dancefloors in a trance to the sounds of "rare, new, and singular" music, under the strong influence of ethnic and world music. Mixes where German Kosmische clashes with space disco, along with the most experimental side of British new wave, industrial music, creepy funk, deviant rock and pop. All this mixed with Brazilian and Afro music, reggae, ragga, percussions and bhangra... A kind of mixing in total rupture with that of a dying disco for which it is intended as an alternative. A way of playing songs often at the wrong speeds, at 33RPM instead of 45RPM and vice versa, and always the obsession of a slow tempo, between 95 and 110 BPM, while the cruising speed of disco mixes goes up to 125/130 BPM... A haunting rhythm, accelerated or slowed down voices, with experimental and ethnic approaches... the sets by Moz-Art, Ebreo, Roberto Lodola, TBC, Meo, Fabrizio Fattori... are endowed with a baroque, quasi)mystical dimension. Without forgetting the enemy brothers, at the origin of this fusion of styles, Daniele Baldelli, resident of the Cosmic Club in Rimini, who called it Cosmic Style, and Beppe Loda, resident of the Typhoon in Gambara (a small town not far from Belfiore, unsurprisingly) and who referred to his mixing as "Afro Style". "Afro", the name that will be adopted by this scene and especially by its fans, recognizable by their post-hippy style, their Citroën DS or 2CV, with car radios fully powered by mixtape cassettes recorded in the clubs by these DJs, then sold in the parking lot of what was still called "the discotheque" at that time. This "Afro" wave mainly involved 3 regions in Italy (Lombardy, Emilia Romagna, and Veneto) and the young Austrians and Germans who would go there on holiday. Among them, Stefan Egger, a young DJ from Innsbruck, received a monumental shock while listening to a set by Daniele Baldelli during his holidays in Rimini. Therefore, he decided to make his Austrian dancefloor resonate to the sound of the Cosmic Style.

While the official history of underground dance music has very quickly and rightly retained the contribution of DJs from Chicago and New York, it was not until the early 2000s that interest in the Afro/Cosmic scene was finally shown. Since then, a lot has been said on this scene, its DJs, their completely crazy and obscure tracklists, while Daniele Baldelli and Beppe Loda are playing Boiler Room sets as well as Europan and Japanese gigs one after the other. But few have shown interest in the moment in time when, at the end of the 80s, these DJs became producers and started creating songs that sounded like their sets, where all their influences would collide, often naively, sometimes with genius, always without filters. Nor to how this scene changed at the beginning of the 90s with a marginal approach to trance and progressive house, when the Italian, Austrian and German DJs of this second Afro period played these trance and progressive records at 33+8, as their elders did with synth wave or post-punk records, always staying within this 100/110 BPM tempo. It is in this last period that this compilation will immerse you, through 8 tracks from the Italian, German and Austrian scenes.
レーベル #: ANTINOTE (FRA)