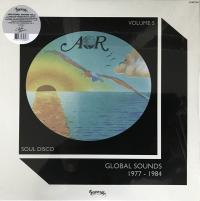 Favorite Recordings and Charles Maurice proudly present the 5th edition of the AOR Global Sounds compilations series: 8 rare and hidden tracks, produced between 1977 and 1984 in various parts of the world. Started in 2015, the AOR Global Sounds series was born from the will of Charles Maurice (aka Pascal Rioux) to share his longtime love for the AOR and WestCoast movement and highlight its influence for many artists in the late 70s and early 80s. In this 5th volume, he selected again highly forgotten productions, deeply infused with Disco and Soul flavors.

Half of the compilation’s tracklist is naturally coming from the US, homeland of this music style, while the other half is made of productions from all over the globe, from France or United Kingdom to Venezuela. And for most of these beautiful songs, it came from artists and bands rather unknown and often released as private press.

Often, these records will have a special story, sometimes they’re just part of the universal quest of finding true love. Nonetheless, they all carry a wide range of emotions magnified by the music.
For example, “Don’t Take It Away” by Westside is as a love song about a new relationship, recorded in Minnesota and mastered on Sunset Bld. (Hollywood) by Bernie Grundman, who worked on Thriller – funny thing, the original LP is a picture-disc, which was still quite rare back in the days because the singer saw one from Mickael Jackson when visiting the studio. “Til’ Mornin’ Comes”, the only release by The Ferry Brothers, is also a love song, recorded in NYC with notably Gwen Guthrie, Vivian Cherry & Patti Austin singing as backup vocalists. On “What Its Meant To Me”, Jonathon Hansen remembers with emotion the good times spent with the members of his band including the vocalist he was in love with. On “J’Irai Squatter Ton Cœur”, Didier Makaga better-known as a French Boogie & Pop singer, arranger & composer, sings a charming declaration of love on a heavy and groovy eighties production. “You Never Know” by Rhapsody, recorded in Connecticut, sounds more like an East coast fusion of Soul and Jazz-Funk à la James Mason. “What You Do To Me” by Sugar Cane was highlighted on a Pittsburgh Rock Radio compilation: listening to this smooth ballad with its amazing Moog synth break will lift your soul. “Kailua” by Venezuelan Jazz-Funk band Esperanto, is a song about Hawaii which evocates bucolic dreamy nights facing the ocean, a typical AOR vibe. Finally, “I Need You” from Mark Williamson is a blue-eyed soul UK groover ending on a four-on-the-floor climax!